Outsourcing for Design Engineering Services Up by 14 Percent 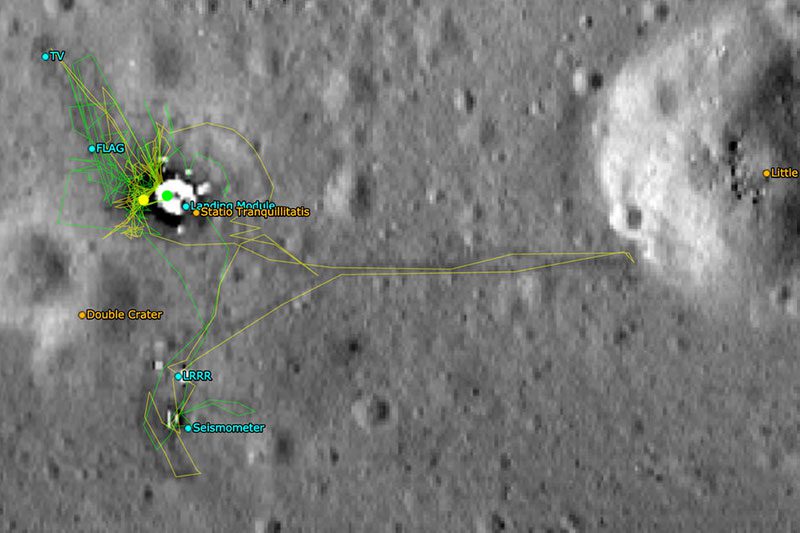 On July 20, 1969 Apollo 11 landed on the moon in the Sea of Tranquility. The moon landing was a giant leap for mankind and those small steps Neil Armstrong and Buzz Aldrin took so far away from home are still there fifty years later imprinted on its surface. The astronauts’ venture in the unknown world that looms in our sky lasted 21 hours, however they only spent two and a half of those hours exploring the surface. Leaving behind the descent stage of the lunar module, they left the surface in the ascent stage.

Almost ten years ago, the Lunar Reconnaissance Orbiter flew 15 miles above the moon’s surface, gathering data and capturing images of various locations, including the Sea of Tranquility. In the images that NASA released of the landing site, the lunar module’s abandoned descent stage and the foot prints of the astronauts were still visible.

The abandoned descent stage wasn’t the only thing visible in the Lunar Reconnaissance Orbiter photos. If you follow one of the tracks left behind, you can see the Passive Seismic Experiment Package, an instrument used to measure and return seismic data of the moon back to earth. It only functioned for three week after the moon landing. Another instrument still visible that was left behind on the moon is the Laser Ranging RetroReflector which was used to get precise measurements between the earth and the moon. Unlike the Passive Seismic Experiment Package, the Laser Ranging RetroReflector is still operation today.

The second visible set of tracks stretches out to a little crater to the right of the lunar module. This second trail was a spontaneous expedition made by Armstrong to the Little West Crater. Traveling about 50 meters from the lunar module, this was the farthest that either of the two adventured on the surface.

The Lunar Reconnaissance Orbiter entered orbit around the moon of June 23 of 2009. It was sent there to help determine future landing sites for lunar missions. While orbiting the surface, the spacecraft was tasked with looking for promising high scientific value resources, suitable and advantageous terrain and a habitable environment for both robots and humans. Another task the Lunar Reconnaissance Orbiter was given was photographing all of the Apollo landing sites including the carious locations where ejected modules struck the surface.

Due to the various instruments on board, the Lunar Reconnaissance Orbiter is able to return a vast range of data including Ultraviolet albedo, global geodetic grid, day-night temperatures and high resolution photos. Scientist at NASA have placed an emphasis on scouting the moon’s polar regions. The lunar south pole may have occurrences of ice in some of the craters due to permanent darkness and inversely the lunar north pole’s uninterrupted access to sunlight would be beneficial from human  and robots alike. All the data obtained by the Lunar Reconnaissance Orbiter has been upload to a public repository of planetary data called the Planetary Data System.

Since the moon lacks any form of atmosphere, there is very little to no erosion on it. That means that as long as a meteor doesn’t strike the landing site, the footprints and data collection equipment left behind by the astronauts could end up staying there, untouched for a very long time. The Apollo 11 landing site might one day become a great tourist attraction for any future moon base inhabitants.