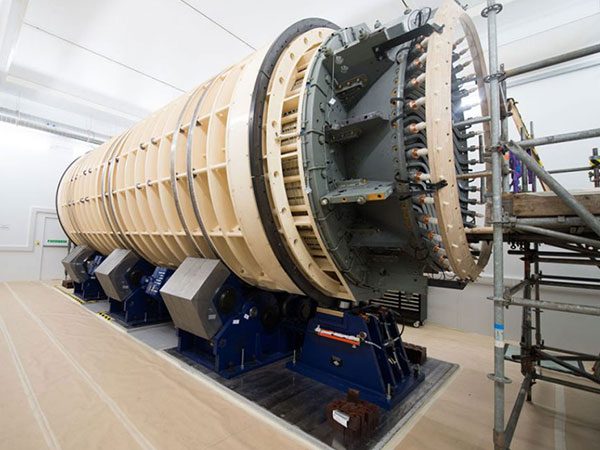 Westinghouse Power Generation was a manufacturer of turbines, generators, motors, and switch gears with several locations in the US. Westinghouse had two large factories in the 70s, the Turbine plant in Lester, PA, and the Generator plant in East Pittsburgh, PA. The Lester plant first closed in the early 80s, and East Pittsburgh followed in the late 80s. Click here to view an original Lester Manufacturing Facilities magazine from 1983, an authentic piece of Westinghouse history.

In 1997, Westinghouse was acquired by Siemens AG, a German-based conglomerate whose energy division creates solutions for energy generation, transmission, industrial applications, and renewable energy. In 2020, Siemens Energy spun off into a separate company with Charlotte as their power generation hub.

Siemens Energy requires a partner that understands its business and can engineer and fabricate tooling and fixtures for products ranging in size and scope from small to enormous.

“When I first came to Charlotte in the late 80s, we had to set up the Generator engineering group from scratch,” said retired Siemens Charlotte Plant Manager Mark Pringle. “We partnered with Enser to make the product drawings and worked well as a team to get the information out to support production needs. Later Enser support expanded to designing very large tools needed for product manufacturing. As a result, there are millions of dollars of tools in the factory designed by Enser.“

ENSER and Siemens’ history go back more than 50 years to when it was Westinghouse Power Generation. In the 1970s, Westinghouse’s largest plant was in Philadelphia, but in the late 70s, they closed that facility and opened facilities in Charlotte and Orlando.

Before video conferencing and email were prevalent, being near your client allowed you to collaborate more effectively on engineering projects. So to better serve Westinghouse and to demonstrate its dedication to their long-term relationship, ENSER opened offices nearby in Charlotte in the early 80s and in Orlando in the early 90s. ENSER continues to support Siemens Energy in those locations but has also supported Siemens Energy in Winston Salem, NC; Houston, TX; Dallas, TX; Middletown, NY; Pittsburgh, PA; Trenton, NJ; and Torino, Italy.

Much has changed over the decades, but one thing that remains strong is ENSER’s commitment to providing Siemens Energy with innovative engineering services and the fabrication needed to support its power generation business. Siemens Energy has engineering and fabrication capabilities for its routine work, but when they need tooling for a new product, they rely on ENSER to provide it. ENSER’s decades of experience working closely with Westinghouse and now Siemens Energy gives it a unique perspective and familiarity that other engineering firms don’t have. ENSER has designed and fabricated hundreds of products over the years for Siemens, including power rollers, lifting beams, turn-down fixtures, and much more. The energy company has taken advantage of all three of ENSER’s divisions: engineering, fabrication, and staffing. To further demonstrate commitment to their clients, ENSER provides designs to its customers in their chosen CAD software and has invested in many different packages.

Although this is the longest partnership ENSER has had with a company, it speaks to the core of who they are as an organization. It is the standard operating procedure for ENSER’s engineers and staff to learn all they can about a client to provide them with the best possible solution.

“I tell my clients we’re not a one-and-done company. We try to get clients to allow us to learn about their business, so they know they have support should any needs arise,” said ENSER Regional Manager Chip Wilson. “We will have somebody here on staff that understands their business and can help them with anything they need to have done, especially in the manufacturing area.”

Working with many clients on countless projects over its 75 years in business, ENSER gained unique experience in most verticals and niche fields. That expert knowledge is invaluable to companies like Siemens Energy that work in very specific markets. This comprehensive knowledge allows ENSER to provide innovative solutions others may not have considered

“We bring a more diverse view of the world than most of our clients have. For example, Siemens is in the power generation world. They know turbines and generators, said Chip. “We do too, but we also support Below The Hook lifting devices, nuclear fuel rods, tractors, automotive brakes & axles, testing equipment, load-bearing equipment, shipping containers, and more. Our team provides a broad experience, so our clients don’t have to worry when projects stray from their core competencies; They know they have our support.”

“ENSER’S reputation was primarily built on the quality of service we provide, and we firmly believe that long-term client satisfaction is the cornerstone of our success,” said ENSER President Marco Arnone. “We are committed to superior quality and service, and I believe the Westinghouse/Siemens 50-year relationship is a true testament to this philosophy.”

Taking on large complex projects, both in scope and size, is where ENSER excels. ENSER has worked with Siemens on many large and complex projects. One notable project involved updating a generator in a North Yorkshire, UK, power station. Siemens’ customer, DRAX Power, required a power roller system with a 360 metric ton capacity for the on-site generator stator rewind. ENSER was brought in to work with the duo to design and fabricate the power rollers. These power rollers are needed to rotate the 300-ton generator’s stator core, which converts the rotating magnetic field into an electric current so that the copper conductor bars that make up the winding can be safely removed and inserted.

Within twelve months, what was believed to be the world’s largest generator stator rollers were designed, fabricated, and shipped from the US to the UK. The rollers have worked so well that they are also being used for secondary purposes. Scaffolding is no longer needed to provide access for non-destructive testing, painting, inspections, and instrumentation. See full article here.

Whether you need engineering, fabrication, or staffing services, ENSER is ready to learn more about your business
and demonstrate why companies like Siemens have entrusted them as long-term partners over the last half-century. Backed by 75 years of engineering know-how, ENSER is uniquely positioned to provide the best, most cost-effective, and flexible engineering solutions. Contact us about your next engineering project.