How 3D Printing Could Help Create a Mars Colony - Industry 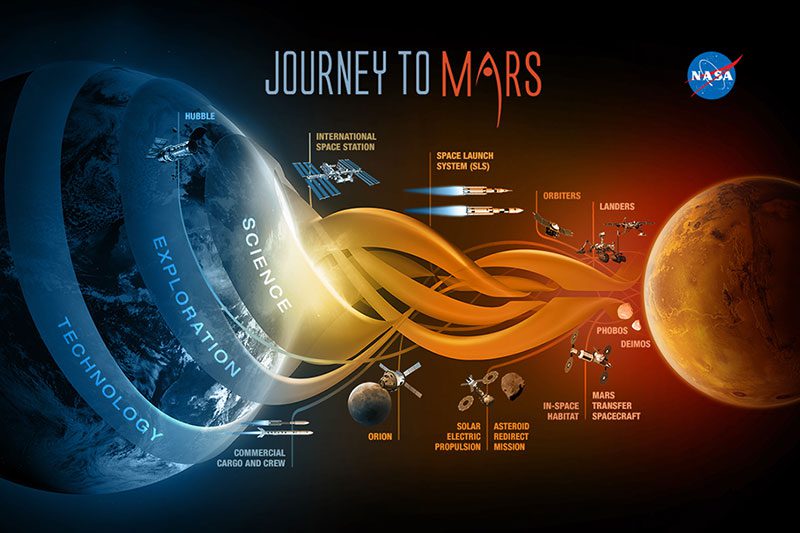 Due to cutting edge technologies that would have resembled something from science fiction to early astronauts, landing humans on another planet may be closer to a reality than we think. NASA has stated that it has plans for a manned mission to Mars, but there is still a lot of work that needs to be done and questions that need to be answered to accomplish this feat. These questions aren’t just about how to get there, but more importantly how to live there. NASA believes that 3D printing could be crucial to our success in creating Mars Colony and here’s why.

One of the most important things the astronauts are going to have to build for themselves once they arrive is shelter. Earlier this year, AI Space Factory was award $500,000 by NASA for their design of a structure that could be 3D printed from basalt,   a natural volcanic rock found in abundance on the surface of Mars. When extracted and mixed with a renewable bioplastic obtained from plants in a hydroponic garden, the rock can create a 3D printing filament similar to polylactic acid. The resulting structure would be able to provide protection for all sorts of natural environmental dangers on Mars like violent dust storms, harsh temperature swings, and extreme radiation.

After constructing your 3D printed house, you’ll need to make sure you have a consistent food source. You’ll be able to obtain some nutrients from the hydroponic garden mentioned above, but that won’t be enough to meet all your nutritional needs. Packing enough food and keeping that food fresh for the 32 month space trip and the subsequent years on Mars is an unrealistic task and the dry arid environment of Mars won’t help this problem any further. 3D printing food is still in it’s early stages of development, but with the right advancements, it could be a potential solution to this food shortage issue. Currently, researchers have only been able to create small chocolates and candies, but hopefully in the future, they’ll be able to print a whole meal, helping astronauts get the nutrients they need for their lengthy space trip.

In order for this Mars mission to be a success, We need to plan for any kind of accident or sickness that could arise. Bioprinting has seen some huge growth in the recent years. With bioprinting, astronauts would be able to us bioinks to 3D print artificial organs and other body parts. Currently, researchers are trying to perfect this equipment for us in a low gravity environment.  They’re hoping to be able to replicate everything from skin tissue to bone cartilage. In addition to bioprinting, 3D printing could offer another medical advantage in printing specific medicine or prescription.

Creating a colony on Mars would take a lot of equipment and that equipment is bound to break, especially on the rough terrain of Mars. This is where additive manufacturing could help out. It wouldn’t seem all too likely for the early stages of the colony, but further down the road it would make sense to bring 3D printers capable of printing with different types of materials and printing in different atmospheric conditions to Mars. These printers could use the planet’s natural resources to print a variety and help solve a lot of spare part and maintenance problems.

Regardless of which additive technology you’re using, weather it be additive construction, bioprinting or additive manufacturing, 3D printers are, at their core tools for solving problems. Many companies today have started using these wonderful machines to solve countless problems, like Pfizer Corporation, a pharmaceutical lab in Connecticut. They used their 3D printer for many different uses like creating a fish-food dispenser to help mix the proper amount of fish with the drug they were testing, test tube holders to hold them in specific orientations, a tablet for counting pills that was easier to use the previous tablet they had. They were able to solve problems and make improvements to situations that normally they would have to just accept. Being able to do this on Mars with the hydroponic gardens or rovers would be an incredible tool and there’s no doubt that 3D printing will be insanely valuable to a Mars Colony.

Wanna find out more about the latest in 3D printers? Learn about how S-Squared 3D Printers made a 500 square foot house using additive construction.