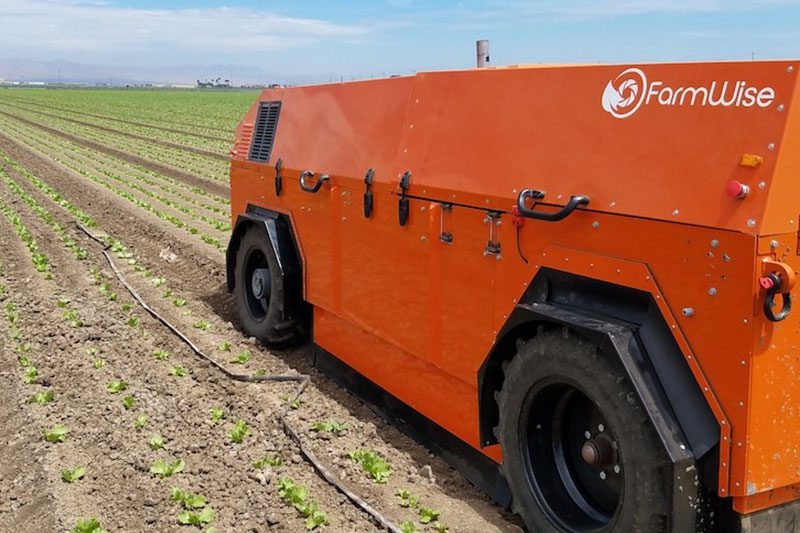 In 2017, the founders of FarmWise, a Silicon Valley based startup, had an idea for a new method of removing weeds for large farms without the use of chemicals. The result was an autonomous weeding robot that offered a huge benefit to most of the Midwest and is currently working in farms across the United States.

“We wanted to build an automated machine for farmers,” said the co-founder of FarmWise, Thomas Palomares. “We saw the labor challenges, the problems with chemicals and all the regulations around them, and we had an idea to help.” In December of 2017, he and his friend Sébastien Boyer formed their startup and started conducting a seed round of funding. With the 5.7 million dollars they raised, they began to design and build their prototype. The prototype was able to differentiate between weeds and crops as it drove over the field and pull out weeds, leaving the crops unscathed. Once the working prototype was built, they began to conduct the initial test in California.

While the initial tests were a huge success, they started to run into a bit of hurdle. They machines were working perfectly, but they had no way to mass produce them. “We had a big challenge – getting everything ready for a huge scale-up of machine-making,” Palomares said. “That meant all aspects of scaling – not just manufacturing, but support, shipping, hardware, and more as machines hit the fields.”

Through PlanetM, a Michigan based partnership that connects companies with automotive manufactures, FarmWise was able to partner up with Roush Industries, a design and manufacturing firm based in Detroit that has a lot of experience in auto racing. “We’ve been known for many things over time,” said the CEO of Roush, Evan Lyall. “Now we specialize in product development, commercialization, and engineering consultation.” FarmWise’s concept of an automated vehicle wasn’t completely new to Roush. They had previously worked on a self-driving automobile for Google’s Waymo project, about a decade ago. “We have other things in the works in a similar vein as well – but those are confidential,” Lyall said.

Roush was exactly what FarmWise needed. “This was a great opportunity for FarmWise to make use of Roush’s capabilities,” said Lyall. “We can serve as a bridge between low and super-high production volume. As they get big, we can help them move to automated systems, and move their manufacturing to scale.”

“This is a very exciting partnership and exchange of knowledge,” said Palomares. “It’s giving us exposure into what it takes to make long-lasting products for harsh environments. Roush already had an extensive knowledge of what works – and it’s impossible to re-invent everything.”

Another important partnership for FarmWise was with the farmers themselves. “We’ve been working with farmers from day one,” Palomares explained. “We’ve shared what we’re doing and we’ve been getting their feedback on a daily basis. We wanted to make sure we’re building a machine they want, and that they’re willing to pay for.”

The framing partnership was a new experience for Roush. “This is an interesting example of how the world is changing,” Lyall said. “From our end, we’ve seen it before in automotive, aerospace, and defense – the increasing use of automated vehicles. Now we’re seeing it in agriculture.”

“We’re proud of the partnership,” Lyall stated. “It’s great to help make tech come to life quicker, in a way that will benefit all of us.”

As FarmWise begins to scale-up their production, they are conducting a final review of their designs and manufacturing process. Their goal for this year is to produce around a dozen automated weeding machines. “We’ve got their supply chain all set up,” said Lyall. “The scale-up will offer an opportunity to continue to refine it.”

FarmWise is continuing to refine things from their side as well. “This is what it means to bring innovation together with knowledge in a given field,” Palomares said. “We’re building new technology on top of existing things that already work very well. We don’t have to disrupt everything.”

Once they get their autonomous weeder in full production, FarmWise plans to apply their technology to other farming applications. One idea they’re currently considering is automating fertilization for different crops. For the moment, both companies are very pleased with their partnership and how it was able to bring together very different skill sets from very different parts of the country. “This is just a great example of Silicon Valley and the Midwest working together,” said Lyall. “It’s the California technology startup FarmWise bringing their expertise to bear on a common farm problem, and then taking advantage of the industrial knowledge in the Midwest for manufacturing.”