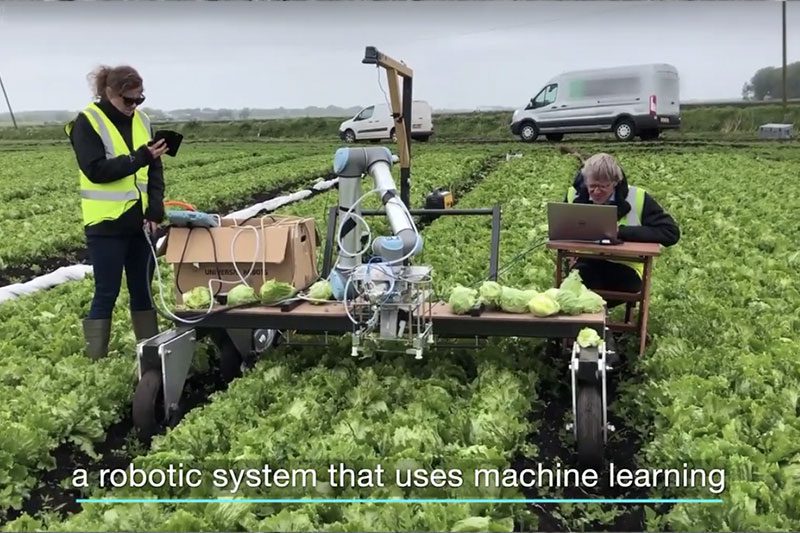 Up until now, Ice Berg lettuce has been a tough crop to automatically collect, but engineers at the University of Cambridge have created a new robot, called Vegebot that harvests lettuce using a machine learning algorithm. According to The Journal of Field Robotics, what originally started as a proof of concept lab test has now advanced to a full fledge machine that has been consistently and successfully picking lettuce in an assortment of different fields.

The Vegebot has a computer vision system built into it and using its overhead camera, it can identify the head of lettuce and determine whether the lettuce is still growing, ready to harvest or diseased. After the Vegebot determines that the lettuce is ready to harvest, a second camera is used to guide a Universal Robots UR10 arm with a blade anchored to it to cut the head. A gripper or end effector is then used to collect the harvested lettuce from the ground.

While this prototype was success in picking the lettuce, researchers admitted that this process currently takes more time and is less efficient that using human workers and still needs a lot of work. Harvesting lettuce automatically is an arduous problem to solve because the heads grow low to the ground making it difficult to cut and they can be easily damaged during handling.

The researchers at Cambridge were able to use a set of lettuce images to train the Vegebot to recognize and classify diseased or infected heads of lettuce through a machine-learning algorithm. They were also able to teach the Vegebot the proper grip to employ when handling the delicate crop so it doesn’t get damaged. Although not fully complete yet, the Vegebot and other robotic harvesters could not only help relieve labor shortages in the farming industry but it could also diminish food waste.  Instead of picking the whole field in one pass, forthcoming iterations, according to researchers will be able to continuously and repeatedly analyze and harvest fully developed vegetables